skip to main | skip to sidebar

The Ryan pick represents a big gamble for the GOP.  R-money has pandered to the base, who want to debate economic issues, but the Ryan budget plan is a big target for Obama and the progressives.  Ryan's Medicare voucher program will alienate him among seniors, especially in Florida.

Ryan, the scion of a rich Wisconsin family who lives in a six-bedroom, eight-bathroom mansion that is a historic national landmark, has little credibility among the middle class.  His pursuit to drastically reduce or end the federal economic safety net lands him squarely in the same rarefied air of the one percent.

Accordingly, the rest of us do not matter.  Ryan is a vocal proponent of the objectivist philosophy of Ayn Rand.  He cites Atlas Shrugged as one of the most influential books he's ever read.  Anyone who has read Rand knows that there is no greater purpose for man than the furthering of his own self-interest.  Rand was a staunch atheist, and believed that altruism and collective goodwill were anathema to the ultimate success of society.  The fact that the Ryan budget wants to radically alter and/or dismantle federal entitlement programs, while worthy of debate and compromise, should give the Obama campaign great big gobs of red meat to feed their supporters.

With the Ryan pick, R-money has not redirected the debate toward economic issues.  He has solidified this election as class warfare.  Obama needs to exploit that issue as mercilessly as he has exploited R-money's corporate vulture persona.  A great Obama campaign slogan: "Vulture/Voucher 2012: NOT change we can believe in."

A little side issue with the Ryan pick that pivots off his Randian leanings: the GOP has defined itself, despite any claims to the contrary, as the party of real Christians.  As rank-and-file Republicans apply religious litmus tests to all candidates national and local, as they continue to press on social issues like gay marriage and abortion as inherently anti-Christian (hence, anti-American in their twisted "Christian nation" delusion), they create a huge problem for R-money.  Embracing Ryan's Rand-inspired budget turns the GOP into a bipolar beast.  It is impossible to fully embrace individualistic economic policies that destroy federal safety net programs while proclaiming that they live by solid Christian values.  Rand would be clawing at her casket trying to get out to spit on both R-money and Ryan.  This is another potentially huge target for Obama, who should run at R-money with this like a freight train, asking him to reconcile Ryan's anti-Christian budget to the GOP's bedrock Christian identity.  Of course, Obama won't because Democrats are, by definition, squishy and fearful of backlash.  But it would, at least, make for an interesting debate this fall.

Posted by Eric Potruch at 7:09 AM No comments:

How Paul Ryan Will Help Obama Win Reelection -- And Easily 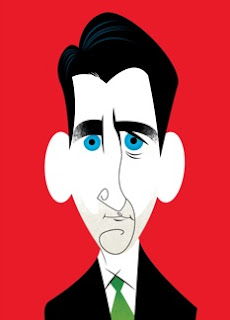 Ryan Lizza has a must-read piece in The New Yorker about Wisconsin Rep. Paul Ryan, who has in the past 14 years gone from an idealistic back-bencher to an ascendant star in the new generation of House GOP leadership.  While I had initially read the piece primed to confirm my distrust and contempt for the guy who wants basically to dismantle the structure of the federal government as we know it (and I have not been disappointed there), I have also gained a measure of respect for a man who took his learning, his training, and his best intentions and has stuck to his guns. He believes in what he does, and he is informed and well-read enough to be taken seriously.

The piece also makes him somewhat sympathetic as it describes a time when President Obama invited Ryan as a VIP to a speech he was giving to discuss Ryan's economic plan (presumably to showcase how he and Ryan, on opposite sides of the ideological spectrum, can still find common ground), only to watch Obama eviscerate it before his eyes.  Talk about a defining moment.

Where Lizza succeeds in showing how Ryan will help Obama's reelection campaign is a bit oblique, but nevertheless needs to be heavily showcased.  These three paragraphs did it for me:

As [Ryan's hometown] Janesville increasingly becomes a base for the business of distribution logistics, its single most pressing economic concern is good roads. [John] Beckord [a Ryan supporter and the head of Forward Janesville, a pro-business economic-development group] pointed toward Interstate 90, which runs southeast a hundred miles to Chicago. “From an economic-vitality and economic-development perspective, transportation infrastructure is huge,” he said. Next year, I-90 around Janesville will begin expansion from four lanes to eight. The project, the top issue for the local business community since the G.M. plant closed, will be financed as part of a billion-dollar federal and state highway project. “Paul has been as helpful as he can be to encourage that development,” Beckord said. “But, as you know, he also has a philosophical disconnect with the idea of earmarks.”


We passed a warehouse-like building under construction where several men in hard hats were at work. Beckord explained that it would soon house the Janesville Innovation Center, providing entrepreneurs with commercial space in which to launch their ideas. The money came from a $1.2-million government grant through the Economic Development Administration, one of Obama’s major stimulus programs.


There was one more success story that Beckord wanted to share. A few years ago, he had a melanoma that was treated with a radioactive isotope; this isotope is administered to fifty-five thousand patients a day but has a half-life of sixty-six hours after manufacture, so it must be delivered quickly. The isotope, known as a medical tracer, is made outside the United States by a complicated process requiring highly enriched uranium from nuclear reactors. The government offered twenty-five-million-dollar matching grants to companies that could devise a way to produce the material domestically, without using enriched uranium. “Two of the four companies that won that competition, incredibly, are going to build plants in our county, and one of them is going to be in Janesville,” Beckord said. In May, the federal government announced that it would contribute more than ten million dollars to the new facility, which could employ some hundred and fifty people.

Ryan does acknowledge that Obama's much-maligned statement, "If you've got a business, you didn't build that," was referring to the infrastructure and education programs that were clearly government helping the individual achieve success rather than impeding it.  Also, Ryan clearly sees the federal government's hand in the resurrection of his town.  But this doesn't stop Ryan from maligning Obama anyway: "His comments seem to derive from a naïve vision, an idea that the nucleus of society and the economy is government, not the people."

A Republican ideologue of Ryan's stature and ascendancy cannot be quoted as giving any credence to anything Obama has said, done, or proposed.  To the modern GOP, it's enough to oppose, with great enthusiasm, the legitimacy of the Democrat occupying the White House.  And, while his intentions to show the country that the GOP has "a solution to get us out of the ditch we're in, and to be proud of it" is worthy of our attention, sane voters from the center to the left know better that Ryan proposes no solution, nothing conservative. It's scorched earth; it's ruthlessly pro-wealthy and anti-poor, anti-worker, and anti-middle class.  Gingrich was right.  It's a like a course of strong antibiotics, which not only kills the infection but every other good bacteria in the body.  And the more he pushes it, the stronger Obama will get.

(Ryan caricature from The New Yorker story)
Posted by Eric Potruch at 12:45 PM No comments: